Another piece since we’re not out of the woods yet.  On May 1, 1968….little over 7 years into my Calligraphy experience (yikes!  it should have been better!)….I had a smooth, wide board cut to the proportions of a post card, but much larger.  I wanted to congratulate an aunt and uncle on their 25th wedding anniversary so I put the ‘THIS SIDE OF CARD…’ and the rather one-dimensional and horrible picture of Abraham Lincoln on the board first.  Abe must have had his own official U.S. Post Office post card design for me to copy from.

I used a Rapidograph technical pen for the graphics. After lettering the front and back of the board with a flat brush, I sealed the ink and tempera paint with clear acrylic aerosol spray and marched it up to the postal window in Irving, Texas.  As though it was routine, the clerk  weighed it and told me the amount of postage it would take to send it. 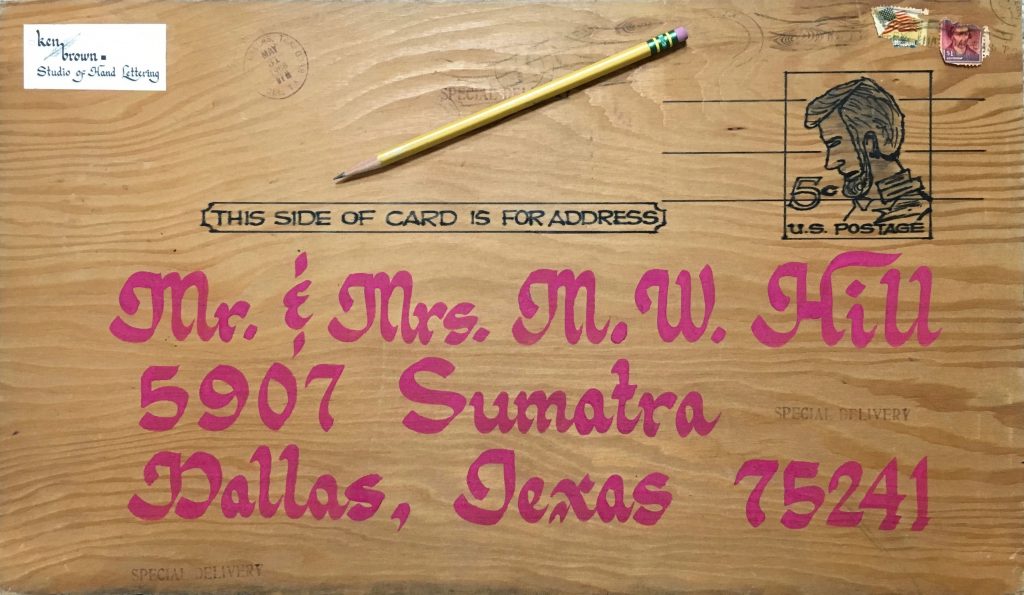 He didn’t question or comment about the fact there was no box, paper, tape, or string to go with it.  I think he loved the fact that it added a bit of flavor to his day, selling stamps and dealing with other eccentric customers.

I don’t know the face amount of the flag stamp, but the other is a $1.  Together, they were enough to get the board across town to Dallas via SPECIAL DELIVERY.  That much wouldn’t get it to the loading dock these days.

The Hills made it to 41 years before he passed away in 1984.  In helping her consolidate her belongings in January, before moving to an assisted living facility, I found this on a high shelf in a closet where it likely had remained for the past 48 years.  Next post I’ll show the other side.

This is another example how your unusual creations with a bit of handwork will stay around for a long time when given as gifts.  Now that I have a picture of it, and it has come full circle, I’ll probably chunk it in the fireplace the first cold evening we have.  I need to be consolidating some of my own stuff on a number of high shelves!

A NOTE & A REMINDER….In every Ken Brown Engraving Workshop I teach, the first part of the evening is devoted to letters made with a flat pen, marker, brush, popsicle stick, or wood chisel in wet cement.  I show the strokes and the letters and how they relate to the script we do with the drill before the end of the orientation session.  So…you get a small dose of regular Calligraphy.

Also, if you’re planning on attending the late June session, enroll as quickly as you’re ready so you can get the Student Packet to begin tracing the script and learning the letters before you come to the Workshop.  Gives you a huge boost to learning faster with the drill, in class.

One Response to A 1968 PIECE OF CALLIGRAPHY ON WOOD SEES DAYLIGHT AGAIN.