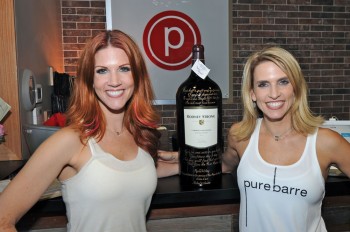 Hold on!  This is not an ad, but a setup for the refreshments later…. 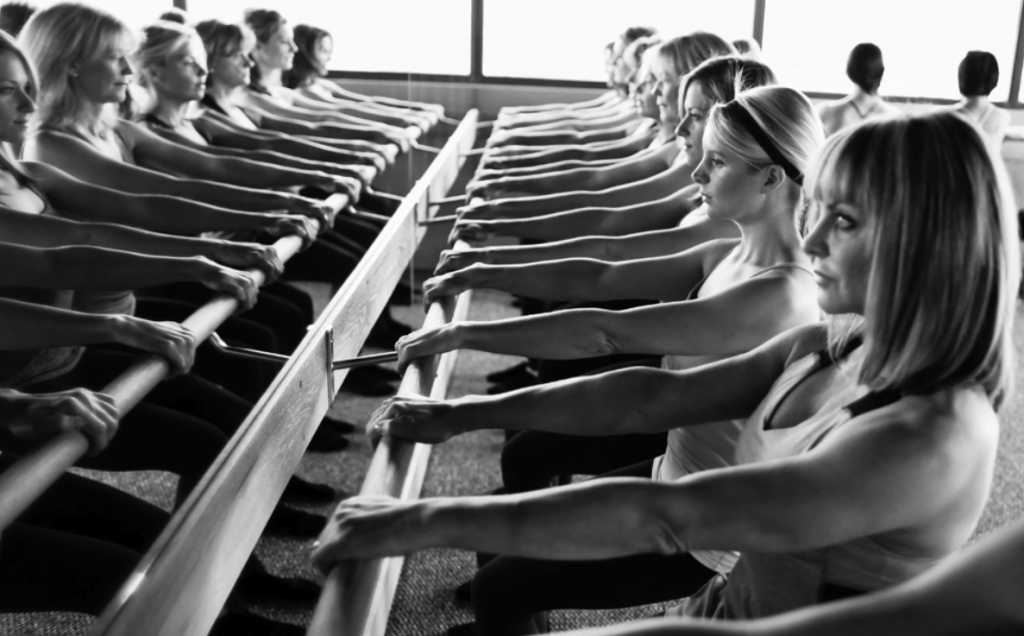 Seems from where I sit, quite the rage in fitness for women these days is a place called Pure Barre.  These salons of sweat are scattered about the countryside and the girls flock to them, some waaay before the roosters crow, to bend and stretch and strain and work out, muscles burning, along a stationary handrail…a barre…in front of wall to wall, floor to ceiling mirrors.  Barres are used extensively for loosen-the-bones and body-parts-warmup in ballet training. No Swan Lake here, just girls getting in top shape with help from a couple of veteran ‘barre tenders.’

Rachel, the daughter of my brother, Michael and his wife, Sandra, has teamed up with another young lady, Amy, to open a Pure Barre facility in Colleyville, Texas.  To celebrate their recent grand opening a few days ago, Michael composed an 8-line poem (runs in the family) and asked me engrave it on a ‘large’ bottle.  I had just the ticket. 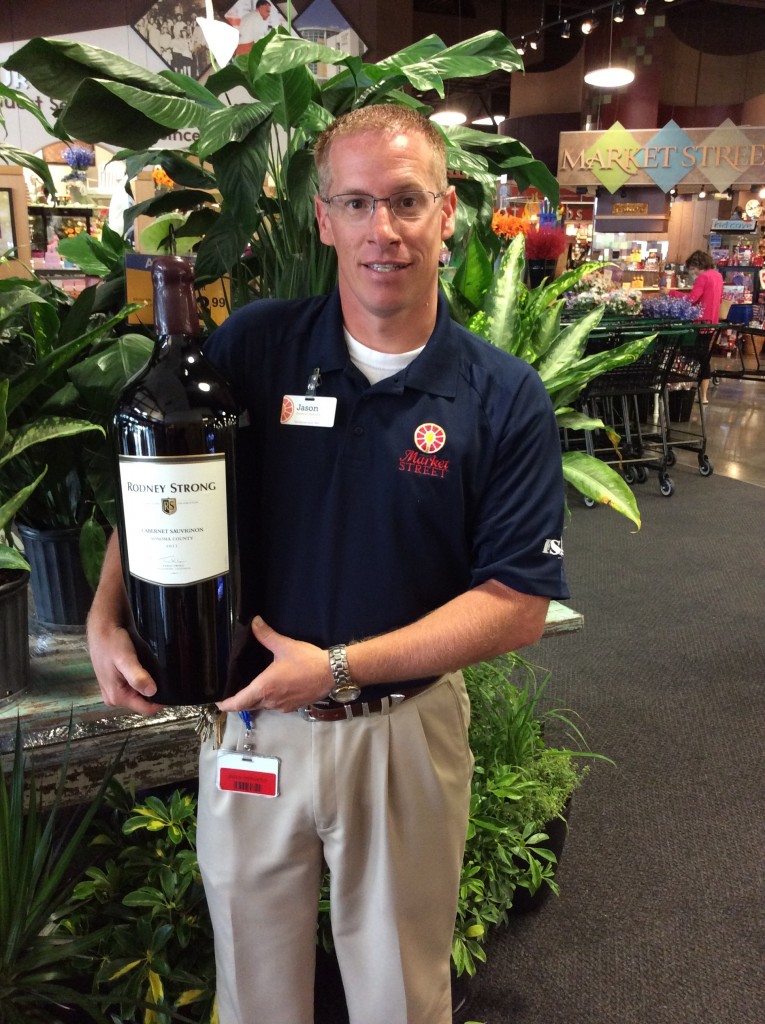 Over a year ago, Jason, the director of MARKET STREET in Allen, Texas, agreed to sell me a giant wine bottle on display in the store.  I had a surefire place for it, after a special inscription would be added for a large corporate customer of mine.  I bought it, then the customer who needed a special presentation felt it was just too large.  A smaller bottle was done and this one has been sitting in my Studio since, waiting for a new purpose.

When I got Michael’s verse, I knew Pure Barre would be the perfect destination, so I offered it for his rhyme.  It was a resounding “YES!”  The bottle holds 5 liters of wine!  That is the equivalent of a full case of 12 regular-size, 750 ml wine bottles.

Here’s Michael’s verse, typed and sent to me for hand-engraving on the bottle:

There’s huff & puff and quite enough

Of ways to shape and tone.

To run is one. Weight lift? Not fun.

So each must find her own.

Look far and wide as you decide

Your fitness day to day.

And soon you’ll find that your behind

Will firm the Pure Barre way!

Congratulations, Rachel & Amy, on the opening 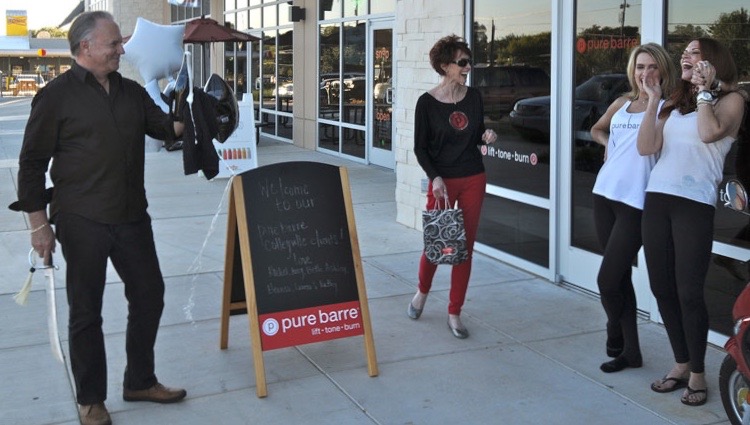 …and the cork did fly!

At a small ceremony in front of the facility, just before it opened, Michael performed the Art of Sabrage…the ceremonial opening of a bottle of Champagne with a long blade.  He’s holding the bottle, with a bit of the bubbly flowing out after the top was knocked off with one swift swipe of the saber.  He quoted another short verse about the procedure just before the swipe.  Sandra, in red pants, Amy, and Rachel were thoroughly entertained and enjoyed a toast to the new business. 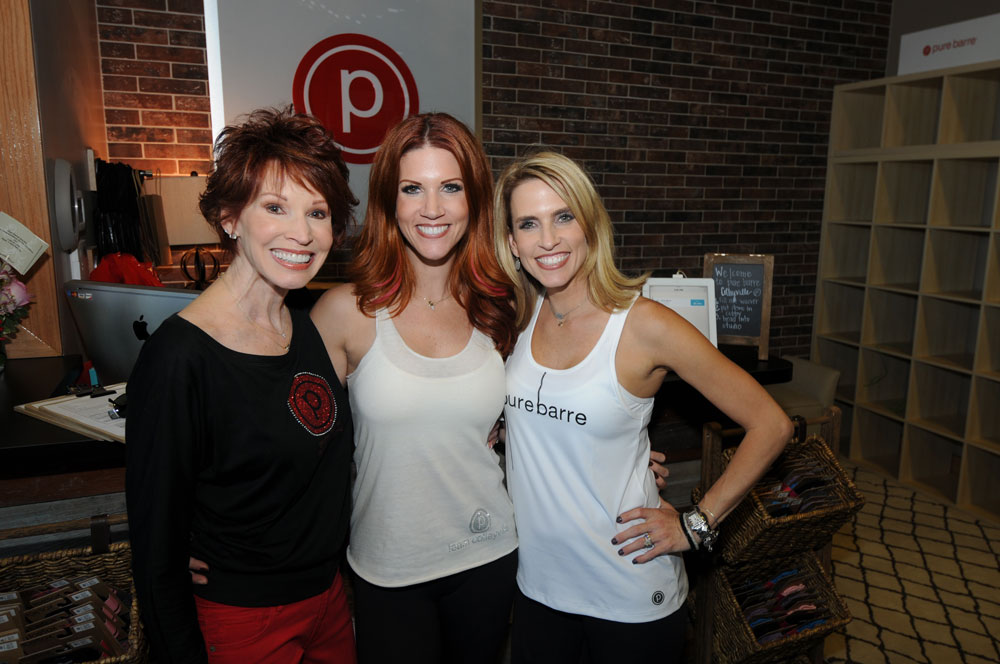 Ever see three more beautiful women in a pose?  Sandra, Rachel, and Amy.

(You may already know of Sandra Brown, the author of a best-selling novel or two you may have read!) 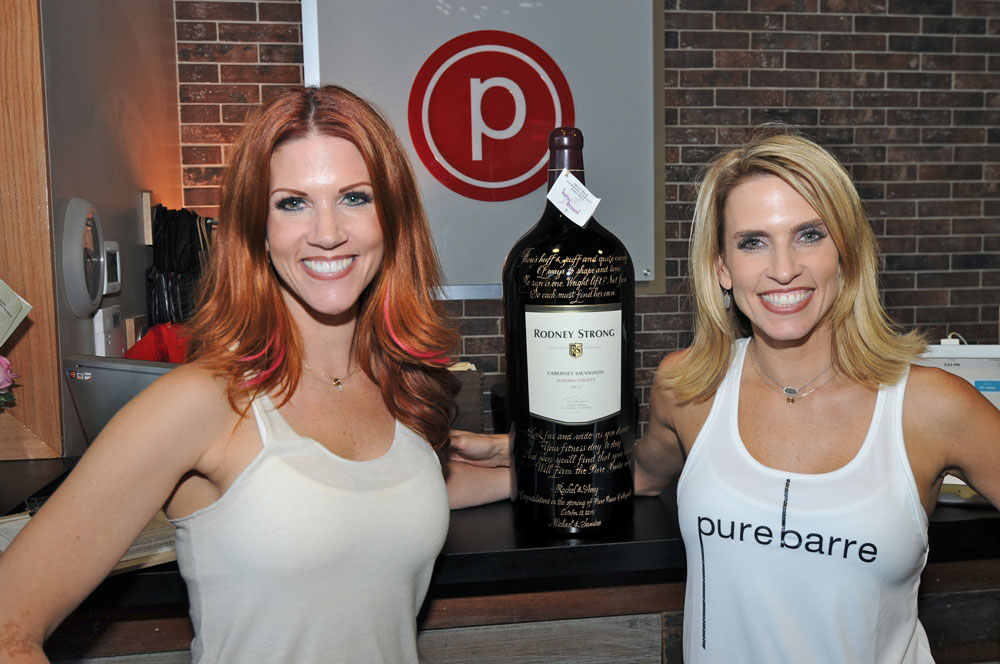 Here is the bottle with the finished engraving and Antique Gold Rub ‘N Buff in the letters.  Funny how things work out, no pun intended.

The big bottle with STRONG in the name describes exactly what the girls strive to be….at the barre! 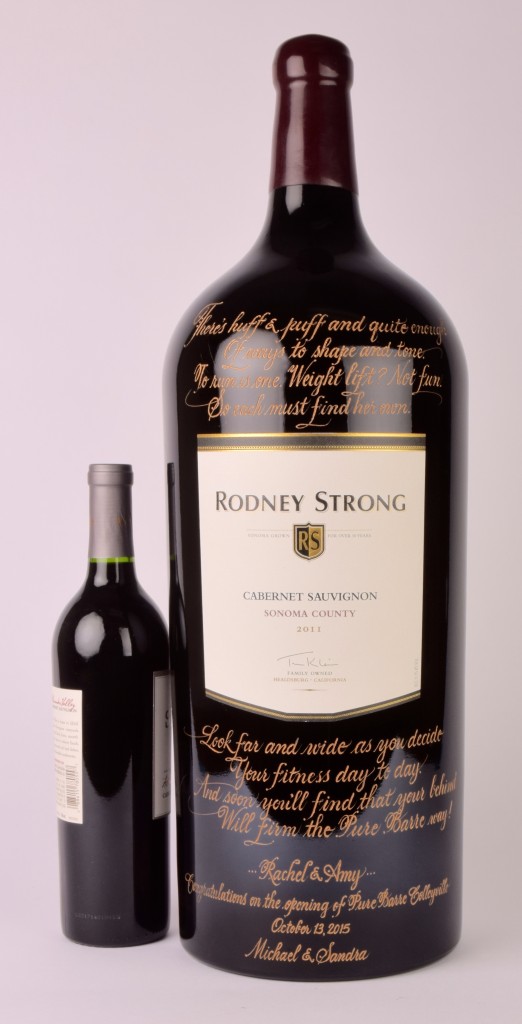 For size comparison, the 5 liter stands beside a regular 750 ml wine bottle.

Now, for the technical stuff about the engraving.  I determined what size bur to use to get the longest line of lettering on the bottle so it could all be viewed…well almost….from one vantage point, not needing to turn the bottle, or walk around, to see it.  I selected a #4 round carbide after a quick test on a piece of flat glass.  The first letter, a T, barely visible, was done with a #6.

I determined the space needed between lines to keep the first verse as close to the top of the label as possible, to avoid as much of the curve as possible, at the ‘shoulder’ of the bottle.  I put down the baseline with clear tape and a bead of color rubbed along the tape’s edge.  Had to allow for the descender of the f when placing the line for the last line, which I did first, then worked to the top!  The top line fell just at the beginning of the curve.

Below the label, I needed to allow room for the second verse as well as the 4 lines with the names, congratulatory line, and the date.  I dropped down to a #3 round for those.  When finished, I added the color and was done.

So there you have it.  An epic tale of pretty women at a barre, sweating their buns off, in the presence of 5 liters of wine that would taste delicious after a hard workout.  Probably ain’t gonna happen.

Still have seats in the November 9-12 Professional Engraving Workshop where my students learn to sweat while sitting down, learning how to do just what was done on the bottle above!

COUNTRY CLUBS, WHERE THE BATTLES ARE WITH GOLF CLUBS AND THE WINNERS TAKE THE SWORDS.
KEN BROWN & MANY OTHERS HE HAS TRAINED: “CALLIGRAPHY HAS US GOING IN CIRCLES!”

2 Responses to THE GIRLS BELLY UP TO THE BARRE FOR THE NEW FIRM SHOWING UP AROUND COLLEYVILLE, TEXAS!